A couple of years ago, I developed a fascination with Moby Dick, thanks to three creative versions of the book that couldn’t have existed without the Internet. What I knew about the novel before then was just what you learn from American pop culture – white whale, Call me Ishmael, obsessed one-legged captain, etc. And I’d seen the Gregory Peck movie in a hotel room twentysomething years ago. But that was it – the book loomed as an edifice I had no interest in climbing.

The novel had not been in my consciousness for many years, when I saw the debut article from Clickhole go by in my Twitter feed. Seeing the headline “The Time I Spent On A Commercial Whaling Ship Totally Changed My Perspective On The World” made me think “They didn’t, did they?” And, sure enough, they did:

This clickbait article is the entire text of the novel. For whatever reason, perhaps just because I found the idea so funny, I started reading it. And what I discovered was an approachable, entertaining voice that I enjoyed. The book moved to the “read this one day” category. (Alas, that day never comes for many books.)

A while later, I was working on an emoji-related project. (These things happen at Google.) After we launched, I was looking for gifts for the team and I came across Emoji Dick; or 🐳. Emoji Dick is a crowdsourced and Kickstarter-funded translation of the novel into, well, emoji. For example, the famous first line is rendered as “☎️👨🏻⛵️🐳👌.” You can argue with the translations – and good luck to anyone trying to read the book in emoji only – but it’s an impressive effort. And I thought that the book, along with some pillows, would be the perfect way to say thank you to the team: 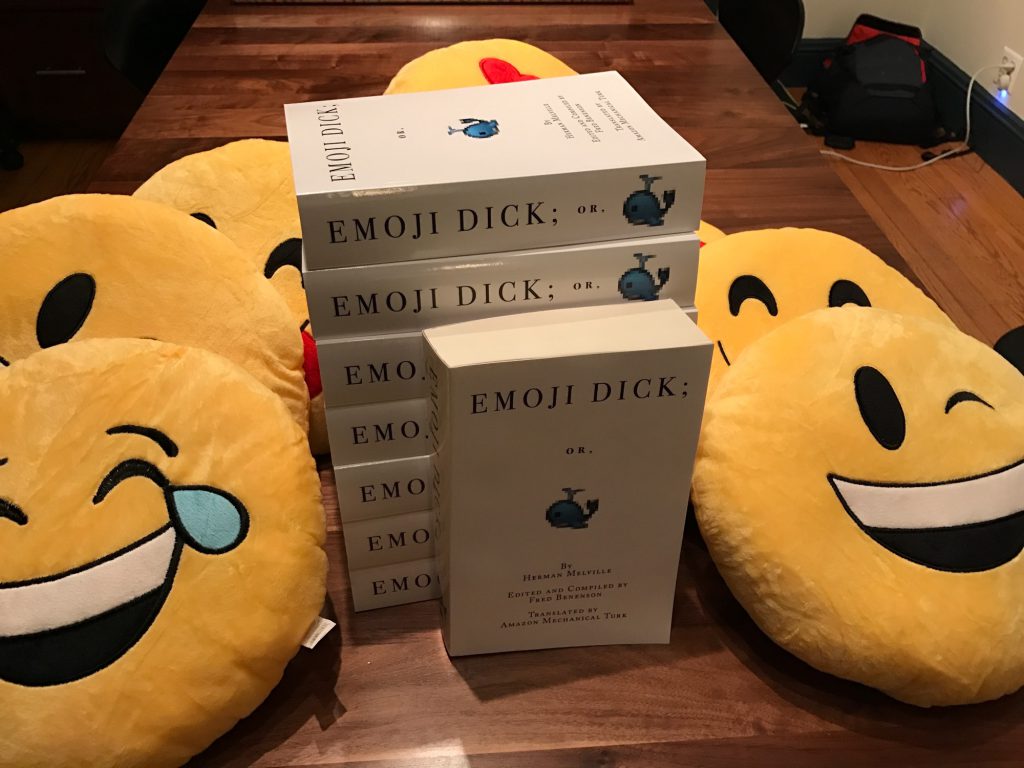 Around the same time, I came across a mention of the Moby Dick Big Read, a 2011 podcast of all 136 chapters of Moby Dick. Each chapter is read by a different actor, writer, or scholar and each is accompanied by a piece of art from a different artist, all made available for free. So I started listening. And I was hooked.

The individual readers vary a lot in quality, but the best give riveting performances. I’d like to call out four of my favorites:

Tilda Swinton’s Loomings, (Chapter 1) immediately drew me in. Her voice is haunting and philosophical, almost eternal, and the egotism of Ishmael is right at the surface.

Simon Callow gives The Sermon (Chapter 9) as a thundering, fire and brimstone sermon.

John Cleave reads The Quarter-Deck (Chapter 36), where we first meet Ahab and the s**t gets real. Both the text and the reading are absolutely gripping.

And Will Self reads The Whiteness of the Whale (Chapter 42) with wide open vowels that seem to harken back from across the centuries.

The Moby Dick Big Read is a truly wonderful contribution to the world; if you’re looking for a long-but-compelling audiobook, I highly recommend it. And, of course, Moby Dick really is a book of astounding depth and humor. Describing it as “The Great American Novel” seems entirely deserved.

While none of these homages to Moby Dick could have existed without the internet, they also couldn’t have existed if Moby Dick were still in copyright. The public domain is a valuable space, called out by the US Constitution’s limitation of copyright and patent to “limited times.” Yet copyright has not expired on any works in the US since 1978, meaning that while remix culture can play with Moby Dick, works like The Great Gatsby or 1984 remain mostly out of bounds.

Though I’ve now listened to Moby Dick, I still haven’t read it. I want a little more time to pass since listening to the Big Read before I take that on. Maybe this year, maybe next, I’ll buy a nice hardbound edition and read the actual book. I’m looking forward to it.

Thanks to Fred Benenson for Emoji Dick, Angela Cockayne and Philip Hoare for the Big Read, and whichever unnamed prankster at Clickhole came up with the idea of turning Moby Dick into clickbait. And, of course, to Herman Melville. You’ve all given me much pleasure.

One of the great things about ebooks is how easy it is to read a sample of a book. It’s become a matter of course to download a sample of any book that sounds interesting, without thinking about it, just to have it to hand when I’m looking for reading material. When the sample bit is interesting enough that I want to keep reading, I buy the book.

Of course, authors are now aware of this behavior. When books were mostly sold in physical bookstores, there certainly was incentive to make the first pages (or page 99) interesting to a browser. Now, however, there’s a very clear part of the book – the freely downloadable sample – in which the author can go into full-on sell mode. That can be a completely different thing from appealing to someone who’ll flip through a book and end up at a random spot.

What made me notice this was (the sample of) Barb Stuckey’s Taste What You’re Missing. The main vibe of the first part of the book was “Buy me! Buy me!”:

This constant selling reminded me of many overly SEO’ed pages I’ve come across in my work, typically pushing one form of snake oil or another. While the book seemed interesting, it didn’t seem interesting enough to be worth putting up with the hard sell.

We saw Paul Auster interviewed tonight as part of the City Arts & Lectures 826 Valencia Program. Auster is one of my favorite authors — very few books are as good as his Leviathan and others, from the sparse New York Trilogy to the rollicking The Book of Illusions, are also among my favorite novels. He manages to be thoughtful and entertaining at the same time and his books are all very well-crafted. I saw him in a similar interview about a decade ago and remember it as a great evening.

Not tonight. Auster was, as before, great to listen to. But the interviewer, who I won’t name, was terrible. She pitched him pointless questions with short answers (favorite type of scotch? you grew up in New Jersey?) and gave him very few opportunities to talk at length, except where she wanted him to tell stories he’s already written. And we really didn’t need to spend five minutes talking about Auster’s relationship with his assistant.

Over the years, I’ve seen some wonderful interviews with City Arts & Lectures and some real clunkers. But never before has the interviewer been so bad that I was looking forward to the audience’s questions; they were a mixed bag, but almost all were better than the official questions.

We saw Children of Men tonight. It is unrelentingly bleak and one of the best movies I’ve seen in a long time. The handheld, jerky cinematography starts off distracting and then became essential to the storytelling. Terrific performances from everyone, especially Clive Owen, Julianne Moore, and Michael Caine.

(I’ve read most of P. D. James’s novels, but I hadn’t read this one; I’ve heard the movie diverged quite a bit from it. After Oryx and Crake, I wasn’t ready for another near future world without children. Now I’m probably going to give it a try, probably as an audiobook.)

What a beautiful, brutal film.

Appropriately for tax season, I recently finished reading David Cay Johnston’s Perfectly Legal. The book describes the current state of the U.S. tax system; the description is of a no-longer progressive, mostly flat system which systematically offers loopholes to the richest while hunting for cheaters among the poorest.

Johnston covers taxes for The New York Times. I’ve read Johnston’s articles for years and I had expected the book to have the Times‘s grand, objective style. It doesn’t; it’s an angry, muckraking book about what he rightly sees as an injust transformation. The message of the book, ultimately, is that the tax code is promoting income inequality.

Johnston blames the current situation on the power of the “political donor class,” the rich few who make the bulk of political donations in this country. That’s undoubtedly true, but I think it’s only part of the story. I think that the rise of an anti-tax ideology as the key pillar of the dominant political party in this country — and the attribution of Republican success to the party’s opposition to taxes — has meant that, regardless of how it happened, taxation doesn’t need explicit opposition from the political donor class anymore.

His chapters on the lack of enforcement of the tax code among the rich and the tax-deniers were, I thought, the most interesting and informative. He also goes into great and informative detail Alternative Minimum Tax; the AMT has been discussed a lot, but Johnston makes clear how far from its original purposes it is today.

The book does has flaws. The biggest is probably that it’s very repetitive. On the other hand, for a book on taxes, it’s not in the least dry — this is a book which should make you angry.

The question, of course, is how to do anything about it. As a political donor, it makes me want to give money to candidates who’ll fix the system, even if that runs counter to a narrowly-constructed version of my self-interest. But nobody’s even running on a “collect the taxes we’re owed” or “make the tax system more progressive” ticket — as Johnston points out, people run away from those ideas today. I don’t think the American political mainstream includes the notion that taxes can be done well; ultimately, I don’t think the country can survive that for very long.